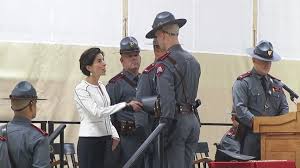 On Sunday morning at 8am on the way to my car I was met by three State Police Officers sitting in TWO State Police cars waiting for me in my condo complex parking lot.

I was told by one of the officers, I as being arrested for “threatening a Judge in a video”. But when I objected to the allegations, he refused to talk about it further.

I’m curious why Three State Police Officers, in two State Police cars during a Pandemic Lockdown were used to pick me up on a six month old outstanding “Body Attachment” for a 59 year old man, suffering from both severe Crohns (I’ve had multiple operations and am on a $10,000/mth STRICT infusion-chemotherapy regimen) and diagnosed with colon cancer? I’d also like to add that this 4-hour drip infusion chemotherapy is “meticulously” managed due to my absence of an immune system. And due to me having NO IMMUNE SYSTEM I’ve been on lockdown for the last 6 weeks. The State Police picked up a sick 59 yo man who has NO IMMUNE SYSTEM and transported him and locked him in a Holding Cell with 10 other people.

Why would the State allocate such resources to have me picked up by three State Police officers? And why did the one who transported me to the ACI say to someone on his phone or radio “I have the guy who threatened the Judge in the video”? Please note, my lawyers have reviewed ALL my videos….and although they don’t agree with my Speech, they have assured me I in no way threaten anyone in my videos. And when I finally appeared before a Judge….I was presented with “Two Warrants for my Arrest”. The prosecuting attorney for the State told the Judge “He has an outstanding Criminal Warrant and one for failure to appear before a Child Support Hearing.

The claim “to the Judge” that I had an outstanding Criminal Arrest Warrant was 100% made up lie. My attorney asked them for the “Control #” and demanded to see it in the State computer system. The prosecutor, after arguing I should be HELD for 6 months DUE to the TWO warrants finally relented and admitted the Criminal Arrest Warrant really didn’t exist. He LIED to the Judge to get me illegally incarcerated!

And can you explain to my why my jail cell was FURTHEST from the Guard Station as possible? And can you explain to me why out the ten of us “minor offenders” brought into Central Lockup at the ACI….I was the only one jailed with a hardened criminal who was transported that day from “Maximum Security” for not once but TWICE beating his cellmate half to death? And if the State Police picked me up for “threatening a Judge” why wasn’t I charged with that during my Hearing???

There is no need to reply to this email. You, the State Police and all the Officers involved will be added to my upcoming “Amended” Federal Complaint against the State for violations of Federal, State and Constitutional Rights. I will send out all necessary Summons and Subpoenas by the end of this week. You can lookup the Federal Complaint by using “1:19-CV-00340-JJM-PAS”.

Someone sent the State Police to transport me to Central Lockup “for my 1st Amendment Rights” and to have “Trayvon” (from Maximum security, who will be subpoenaed as a witness) beat me half to death like he did his previous two former cellmates.

Someone used the State Police to transport me to be murdered! And I have every intention of pursuing Criminal and Civil charges against all involved in this “State Sanctioned 1st Degree Pre-Medicated Murder” of myself.

I look forward to seeing you in RI Federal Superior Court when my Appeal in 1st Circuit Court is decided in July.

Once again, why did that State Police Officer tell someone on the radio “I have that man who threatened a Judge”? I never threatened anyone! I was simply exercising my 1st Amendment Freedom of Speech. And someone in the State was going to KILL ME for that???

Family Steals Equally from the Rich and the Poor

Do I Need College or University?

On November 7th, 2022 VOTE OUT your Senate Judiciary Committee